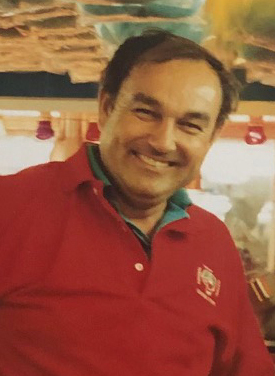 Born in Clyde, Ohio, Bob graduated from Defiance College. He married his college sweetheart, Martha Merrell, and took a job teaching math and coaching basketball.  In addition, he would work summer breaks on the carnival with his Uncle, Arbus Arbogast, making cotton candy and candy apples. After several years of teaching and summers working the candy trailer, Bob hung up his teaching degree and went on the road full time.  Starting out on Gooding’s Amusement Company, which later became Pugh Amusement Company, Bob would travel the winter route in Florida with Jim Murphy’s Blue Grass Shows. One summer, while traveling on a winding Ohio road, a long time trusted employee rolled and wrecked his brand new french fry trailer. Not having it insured, Bob took it back to Florida where he called his good friend, Tom Pugh, to come down for vacation and to help him rebuild the trailer. That would become the start of UniGlide Trailer Company.

He left the “on the road “ operation part of his business to his two sons, Doug and Jeff, and started to manufacture trailers full  time (food, game, bunkhouses, and specialty trailers). Uniglide quickly became one of the leading trailer manufacturers in the industry, building many different types of trailers for companies throughout the U.S. and overseas.

Bob was a true innovator and pioneer in the Amusement industry and passed his passion on to his sons. His legacy and innovation continues on through his oldest son Doug, along with Doug’s wife Lori, and their two children. Doug and Lori travel full time with their own equipment as well as continuing to build new trailers under the Uniglide name and Bob’s vision. You would be unlikely to visit any midway without passing by a UniGlide trailer.

Bob is survived by a daughter, Michelle Dills Wojcik, and son, Doug Dills, along with eight grandchildren.


In lieu of flowers, please consider a donation to the Tidewell Foundation - http://tidewellfoundation.org/donate/