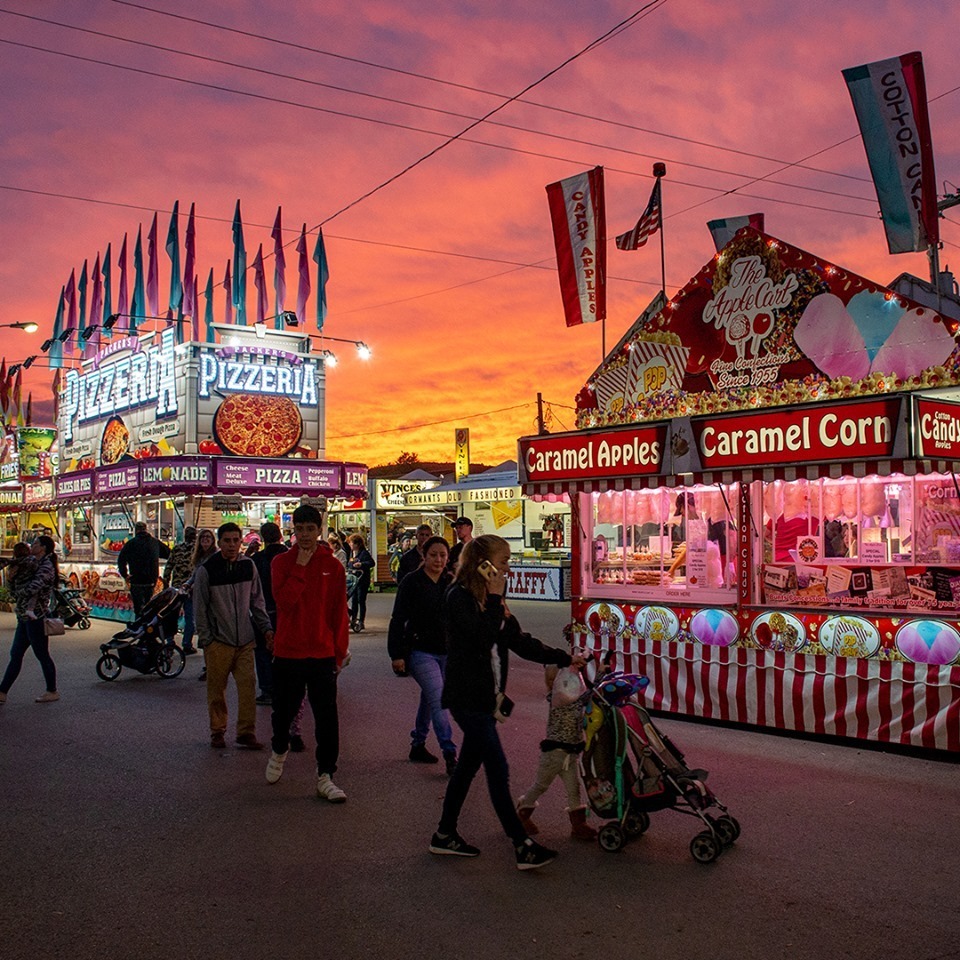 Market early, market often. The Bloomsburg Fair had great weather, a spectacular midway, and a concert lineup mixing some of the biggest names in country and classic rock that play the fair circuit. The result was the fair reached 411,869, an increase of more than 11,000 fairgoers over 2018.

Before you can start pushing the sizzle, you have to have the steak. A combination of better talent buying, routing luck and a new Grandstand Superintendent added up to a concert lineup featuring Rival Sons, Amy Grant, Oak Ridge Boys, Cheap Trick, Old Dominion, Foreigner with Lover Boy, and a closing night show by Toby Keith. The grandstand entertainment was rounded by the fair's signature motor sports events –tractor & truck pull and demolition derby.

Foreigner and Toby Keith sold out, and other acts came close. “We had a good line up, and our new superintendent of the grandstand was very creative,” said Paul Reichert, President, Bloomsburg Fair. “He had new ideas, and they worked.”

Winterfest Marketing
The fair remains committed to headline entertainment and even though the star quality of the 2019 performers shone brighter than 2018, the fair did not have to increase its entertainment budget. “We got lucky, very lucky with the routing,” he said. “The artists were able to play the dates of the show. It's not a buyer's market, but prices haven't gone up from last year.”

What about the early marketing part? Not only did the fair announce the big names like Toby Keith before the end of last year, organizers did so in an event-marketing fashion that not only promoted the concerts but the fair and fairgrounds itself. Winterfest was the first late November holiday extravaganza for the grounds. For all intents and purposes, it was a family-friendly post-Thanksgiving kickoff to the holiday season, with local wineries, ice sculpting, wood carving, and dozens of vendors of crafts, merchandise and food. The event also featured the arrival of Santa Claus, the star of a Parade of Lights that was sponsored by WHLM Radio, a media partner of the fair.

Along with Saint Nick and live reindeer and local artisanal products that drew people to the fairgrounds, the official announcement that tickets for Bloomsburg Fair Fair's grandstand concert lineup were now officially on sale was made. “We usually waited until June or July, but this year we started last December,” he said. “People like the Winterfest and we were able to get them thinking about the fair. They could also buy tickets for Christmas presents.”
Nothing says Happy Holidays like a local crafts-fair, Santa Claus and being first in line for Toby Keith tickets, but Winterfest enabled fair marketing to have an effective structure, building anticipation and momentum throughout the year.

The marketing budget and media buys “were pretty much aligned with last year. We cutback print to some extent, but we have a lot of senior citizens who are customers. We hit the entertainers very hard on our billboards and our radio station partnerships.”

Another grandstand change was the introduction of ticket categories. Instead of general admission ticketing, the fair implemented a tiered pricing system, where better seats cost more. Also, for the first time, admission to the fair was included in the price of the grandstand ticket. Earlier ticket sales and tiered pricing, plus an improved online ticketing system, resulted in online ticket sales increasing by 70 percent. “For the first time in the history of the fair, we heard rumors of ticket scalping going on. You don't like to hear about this, we don't like it, there's nothing we can do about it. But it does show that the concerts were popular with the public.”

Midway Up
Attendance and concert sales seem not the only segments of the fair to benefit from launching the marketing effort so far in advance of opening day. The midway by Amusements of America was up 15 percent compared to 2018, the first year for the carnival company. “It's a great, great fair,” said Morris Vivona jr, owner of Amusements of America. “You get generations of folks who have come to this fair, it's really an old school county fair.”

But the tradition has been revitalized by a new midway. Amusements of America featured 45 rides, which include the Bloomsburg Fair debut of the company's ARM Drop Tower and a handful of kiddie rides. Top grossing rides were the company's signature equipment:  Century Wheel, Thunderbolt and Street Fighter. “The clientele are becoming more carnival friendly,” he said. “There were more people finding their way to the rides.”

The carnival company was far from a neutral bystander in directing fairgoers to the midway. Vivona changed the layout of the midway into what he described was “a layered oval, like a matrix, and we built on that design.”

He also made the fair entrances “more appealing, so you when you come in you look straight, right into the carnival. It's more inviting and once they got into the carnival area, they can get lost and enjoyed the experience.”

Helicopter Crash
The fair was marred by a non-fatal helicopter accident – a sightseeing helicopter operated by J & J Shop Heliair crashed in the fair parking lot, injuring the pilot and his two passengers and damaging more than a dozen cars. The accident is still under investigation and the future of Helicopter Rides at the fair is still being evaluated by the fair board.

The crash occurred at 7:35pm, when the fair was at its peak, with a full grandstand and an estimated 68,000 in attendance. The fair waited to make an announcement in order to avoid mass panic, letting the police, EMT and other first responders handle the situation. “We let the Bloomsburg police department handle the situation and we stayed back, and let them take care of the situation,” he said. “We have a county sheriff who is head of our security and we followed his direction.”

He added, “everyone at the fair was calm and collected. Accidents do happen and fortunately, nobody got hurt too bad. We are still working with the insurance companies and the FAA investigation.”

The Bloomsburg Fair had nearly 600 food vendors, an amazingly high amount for a fair of this size. “People really come out for the food at this fair,” said Vivona. “It's really part of their reputation. You rarely see that kind of selection.”

Reichert pointed out that while a few vendors have more than one stand, the vast majority are individual stands by local vendors.  Popular cuisine included Apple Dumplings, Hot Sausages and French Fries.

It was also the first time alcohol of any kind was sold at this family-friendly fair, but by local vintners. Five regional wineries set up shop in the fairgrounds' Farm Museum Hall – two of these companies participated in the 2018 Winterfest—and sold wine by the bottle, not the glass. Educational demonstrations about vineyards and other wine-related topics were held and local celebrities entered a grape stomping contest. The fair's board of directions will soon be voting on the future of alcohol at the far. Not only do local breweries want to be part upcoming fairs, “but we are hearing from a lot of acts who want beer and alcohol sales for their shows, so we are looking at selling alcohol only at the grandstand next year.”

The Bloomsburg Fair showed that the right headline entertainment benefits a fair, but only if supported by a thought out, extended marketing campaign. “Weather is a big factor,” said Reichert. “We had good weather. The economy has also bounced back this year, you see signs all over the place that we are now hiring, so unemployment is down and people have more money to spend. But starting the marketing earlier really helped. We drew from more than a 100 mile radius this year.”