With over 418,000 attendees, the 100th edition of the Alameda County Fair certainly lived up to its theme: “The Road to Summer.” It was along and attraction packed road at that, with a 19-day run that was completed on July 10th. The fair was making a return to its regular summer dates for the first time since  the pandemic in 2019.

While pre-fair admissions and parking were discounted, on site admission was $18 for ages 13-61, $15 for kids 6 and up, and seniors, with kids ages 5 and under free. General parking was $15 per day. Military members with i.d. received free admission daily. First responders received free admission on July 4th. Wednesday, June 29th, the fair's Feed the Need Food Drive!, benefitting the Alameda County Community Food Bank event, provided free general fair admission with a donation of 4 non-perishable food items until 5 p.m. A Pet Food Drive to benefit the Valley Human Society, also offered free admission with food donations. Carnival rides were offered at just $1 until 5 p.m. as well. A senior day provided free senior admission until 5 p.m. on June 24. And on June 19th, Father's Day, dads were free until 3 p.m. Admission was also free until 3 p.m. on June 17th, the fair's opening day.

But whether discounted admission or paid, guests received a lot of entertainment. According to the fair's marketing and communications manager, Tiffany Cadrette, “One thing that makes Alameda County Fair so special is all the exciting activities and continuous entertainment we offer throughout our 19-day run… it's almost impossible to see it all in one day.”

The fair was packed with highlights, according to fair spokesmen. There were musical performances from Blue Oyster Cult, Sheila E, Neon Trees, and Latin band Banda Machos put on a rousing performance. A Purple Reign Prince Tribute show proved another strong musical act, as was Ginuwine, headlining the Big O Tires live concert in the Lucky Amphitheater. 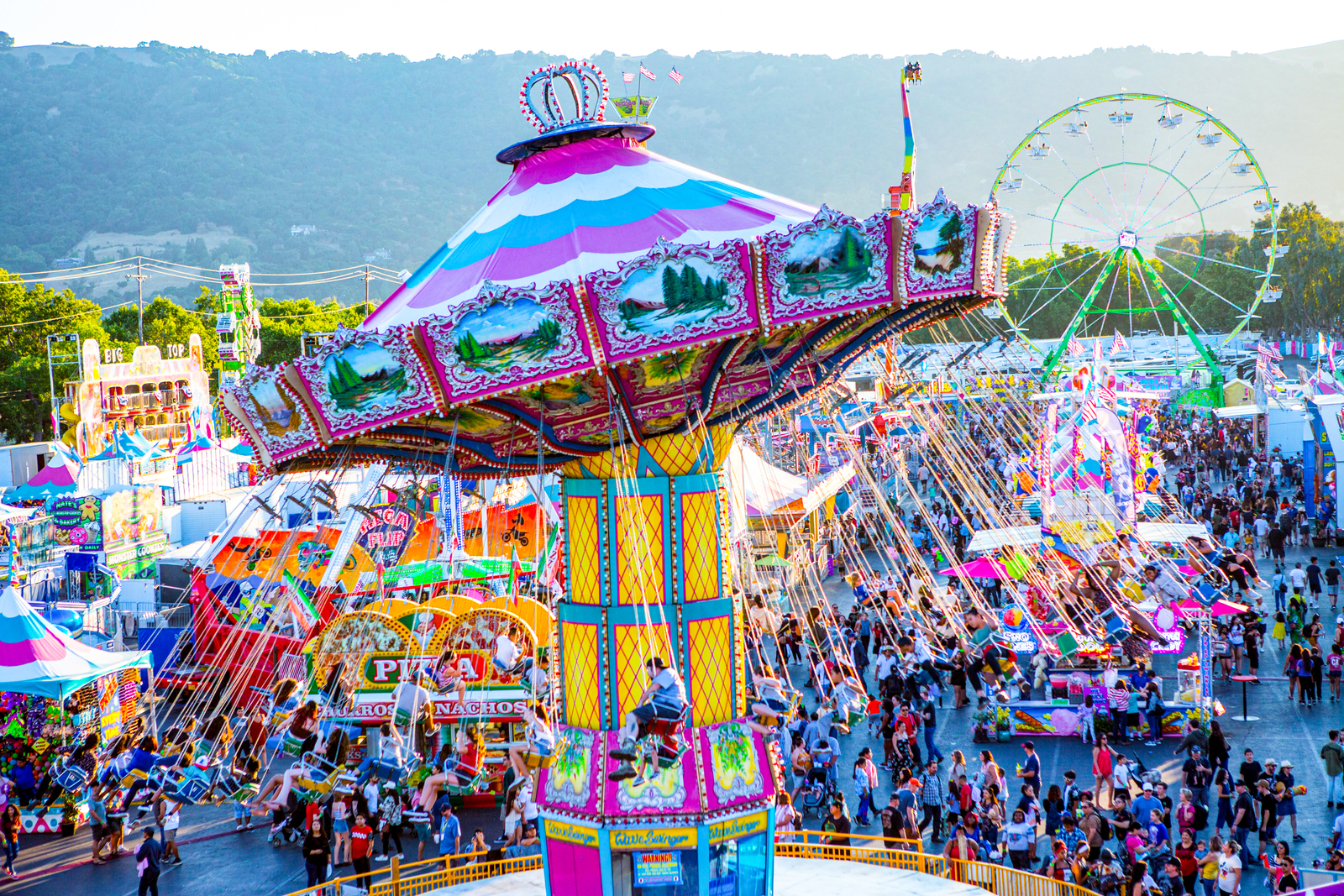 In the livestock area, the Junior Livestock Auction drew crowds and sales, while horse racing at the Stella Artois Grandstand took place for 13 exciting fair days. Races of a different, more amusing sort were also exciting to watch, the popular pig races that took place throughout the fair run were big draws. Also running daily was the Imperial Knights Extreme Medieval Stunt Show at the Stella Artois Grandstand.

Keith Sayers FMX Freestyle Motocross provided their brand of stunt driving and performances with shows at the AgVenture Park. A drone show, new this year, flew high nightly above the grandstand, providing a dazzling state-of-the-art light show.  The only exception was July 4th, when the fair closed early, and no drone show took place. The fair's big fireworks show took place on July 1st.

Family Movies on the Concert Lawn drew kids and parents nightly except the 4th as well, with films such as Luca, Moana, and The Lego Movie.

Football fans were treated to a look at the John Madden Memorial Bus onsite throughout the Fair. Another record breaker – of a different sort than those provided by the football legend – was the regional qualifier for Nathan's Famous Hot Dog Eating Contest. Winners were invited to participate in the future finals.

Right before the fair even opened, the fun began, with the Sun's Out, Fun's Out Run on the morning of June 18th. The mile run took place around the racetrack, and along a course through the Fairgrounds. Registered participants received free fair admission that day. Proceeds from the event benefitted a local area non-profit.

Fairgoers also proved more than willing to sip up when it came to the popular Brew Fest, featuring tastes from over 15 different breweries, primarily regionally based.

Like the wide variety of events offered, the food choices this year made for a vast buffet. Sure, there were traditional giant corn dogs, kettle corn, lemonade, and cotton candy, but Bubble Waffles, lobster nachos, Hot Cheeto Pizza, oysters on a stick, and Hawaiian bowls were also available, along with healthy options such as salads and fresh fruit. Deep fried Oreos, to Mexican, Greek, and Asian cuisine were also available.  There were over 80 different booths in all. To make sampling many treats doable, every Thursday until 5 p.m., fairgoers could dine on $2 Fair Food Bite small portions.  The fair sold 61,247 corn dogs this year, an increase of 73% over 2019; cotton candy sales were up 175% with 13,356 swirling sugar confections sold. 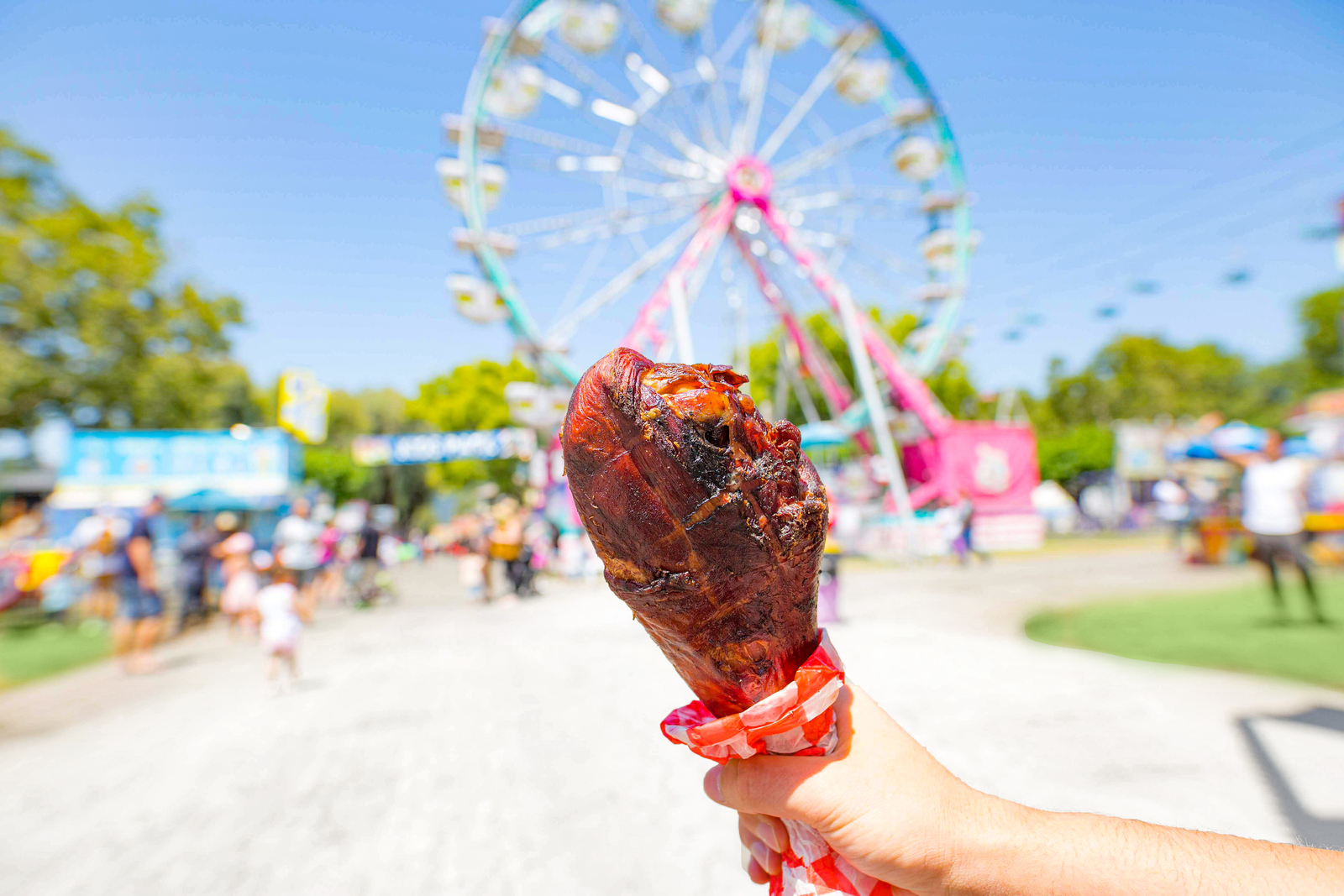 And of course, there was a carnival. Hosted by Butler Amusements. Butler has kiosks throughout the carnival areas which accepted both cash and credit for all day passes and individual tickets. While these could be purchased in advance, during the fair's run, wristbands had to be purchased directly on the fairgrounds starting June 17th. All tickets and the carnival Unlimited Ride Wristband and Unlimited Sky Ride wristband, were digital and contactless. Attendees simply showed their QR code on a mobile device or printed it for contactless admission at the gates, special events, and even parking. Pre-purchase wristbands and tickets were redeemed at onsite Butler Carnival kiosks. Carnival costs were priced at $37 for the Carnival and Sky Ride Wristband Wednesday and Thursday; and at $42 Friday through Sunday and on the July 4th holiday.

Among the most popular Butler attractions were the Mega Flip, Vertigo, and the Giant Wheel. -rising 100 feet and featuring an impressive LED light display. The Century Wheel, Grand Carousel, and Super Shot Drop Tower were also among the busiest rides. Family rides, thrill rides, and kiddie rides all did equally strong sales.

Exhibits were also in abundance, with 7,948 different competitive entries.

This busy and popular fair was a big hit with guests and for its organizers. Jerome Hoban, fair CEO was elated to relate that “The road to summer was a fun ride, packed with summer traditions and memories made.”