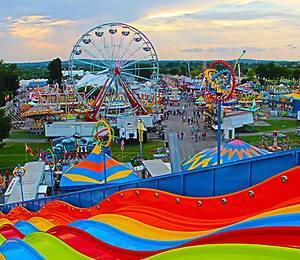 It is often easy to get caught up in all the glittering lights, entertainment and tantalizing food smells of a county fair, losing oneself in all the distractions, at times forgetting the essence of what brought the fair into existence in the first place.

The fair organizers behind Wilson County Fair have not forgotten.

The theme of the 2018 fair was mAGic Memories – the capitalization of the AG emphasizing the importance of agriculture in the Lebanon community and surrounding areas. Magic and agriculture were perfect descriptors for the nine-day event, which ran from Aug. 17 through 25.

While the plentiful entertainment, carnival rides and fair food certainly appealed to fairgoers at the James E. Ward Agricultural Center, it was the agricultural aspects of the fair that really kept the crowds coming back for more.

For starters, animals were a big attraction this year. In particular, Squeakers the pig was a huge sensation. The 18-month-old sow gave birth to 10 piglets on Wednesday of the fair, with six of the surviving piglets being named after fair board members. A most surprising turn of events was that more than one million people tuned in to watch the live stream of Squeakers giving birth. Viewers from around the world watched and asked questions about pigs and piglet care. Several goats were also born during fair week. Due to the overwhelming interest in the goats and Squeakers and her piglets, the fair decided to start a campaign to build a permanent birthing barn facility on the fairgrounds. A GoFundMe page is now up and running to help with the costs. Though there have been controversial views on the practice of having animals give birth in such conditions, supporters say the goal is to provide education and learning opportunities, increasing agricultural awareness for fair attendees.

Helen McPeak, Executive Director of the Wilson County Fair, says the agricultural aspects of the fair were larger than ever before because it has become a goal of the fair board to emphasize just how important agriculture is to the community. People are also drawn to the programming. She says that every year a “commodity” is chosen and this year was Year of the Milk.

“We focused on milk in agricultural education and provided insight into what goes on in the milk industry,” she says. She adds that this was the second largest fair on record, with 575,047 people visiting. Though rain at the start of the festivities may have initially had an adverse impact on attendance, the crowds quickly soared. The last Saturday of the fair brought out 136,626 people alone, which set a new record.

Admission costs were $12 for adults and $6 for children ages 6 through 12. Children 5 and under were free.

Aside from checking out cute piglets and fantastic farming programming, fairgoers also found a lot to keep them busy on the midway. This was the first year that Reithoffer Shows provided the midway entertainment. Around 54 rides were featured and McPeak says that the carnival did very well; it was the largest on record.

Some of the popular rides included the Century Wheel, Enterprise, Giant Wheel, Surf City and Sizzler. Children enjoyed favorites such as Dizzy Dragon, Bumble Bees, Circus Train, Rio Grande Train and Jumping Jumbos. The 65-foot tall Euro Slide was also a huge hit – the slide was imported from Italy and is said to be the largest portable slide in the United States.

Unlimited ride wristbands were available for $25. Individual ride tickets were $1 and the Euro Slide cost $5 per ride.

For fair food, visitors had 89 concession booths to choose from. Tacos, rib eye sandwiches, turkey legs and roasted corn were some of the most sought-after offerings for 2018.

God & Country Day was also a big highlight, where visitors enjoyed listening to songs by a variety of gospel groups.

The Wilson County Fair strives to look for a number of ways to give back to the community. Just a few examples include the service project competitive exhibits, which feature Caps for Cancer, preemie quilts and the quilt block contest; as well as the annual The Great Give Away, where $1,000 is given away on select nights of the fair and one winner can choose a prize that includes either a car, truck or tractor.

McPeak says that one of the biggest challenges for the fair has been traffic control.

“Just getting that many people into the fair safely can be a challenge,” she shares. “We are trying to improve the parking lots, and the Lebanon Police Department helping control crowds has been instrumental.”

She adds that social media outreach has been an important factor when it comes to advertising. “We are reaching more numbers that way,” she says. “We also do heavy local advertising in our area and the surrounding communities.”

The Wilson County Fair board is constantly looking ahead to come up with fresh programs and themes, as well as coming up with a plan for what the commodity for the following year will be. “We have new ideas to bring to life every year of the fair,” McPeak adds. “It's just good, clean, family fun for all, with nine days of so much to see and do.”