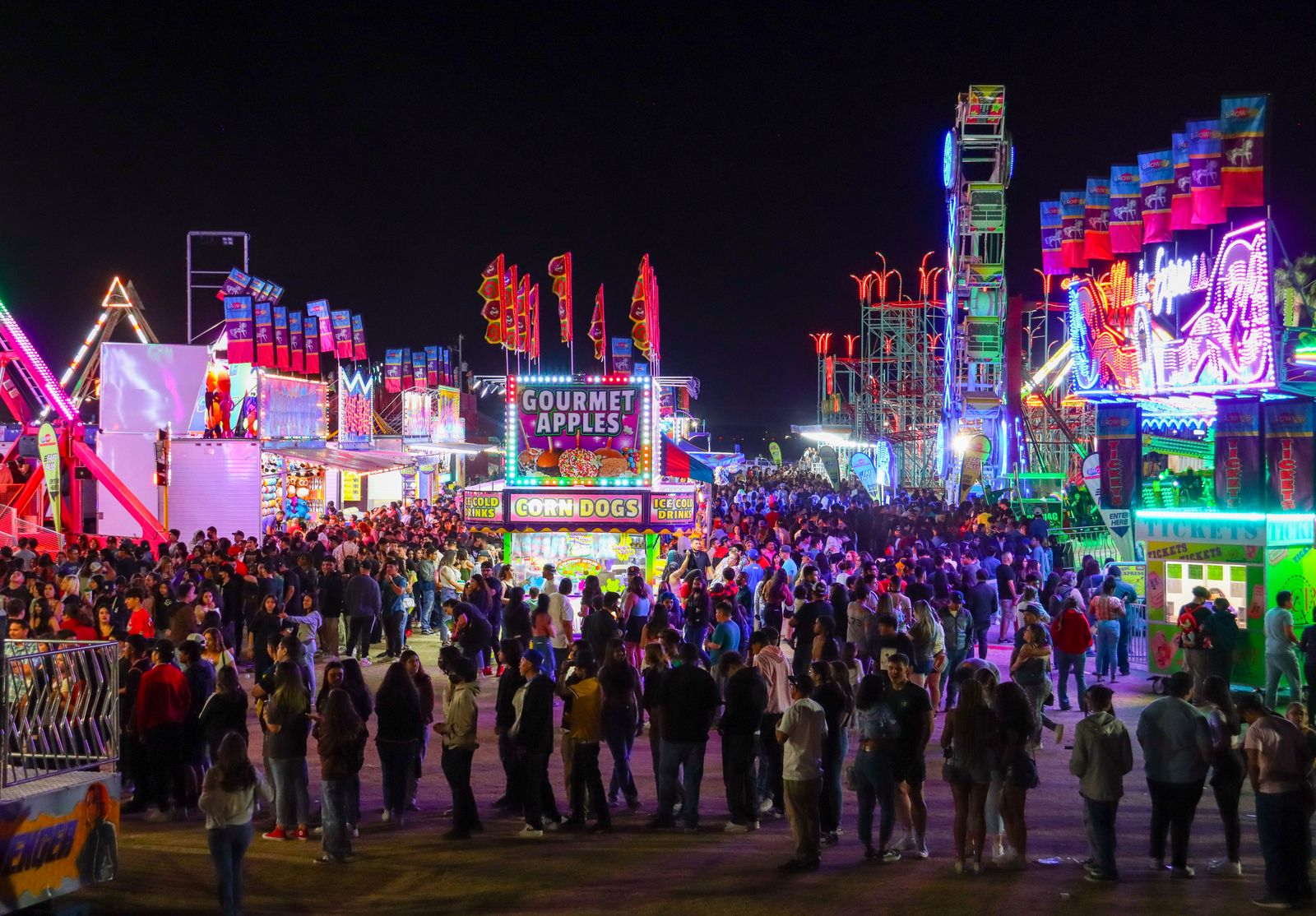 Crowds Flocked to the Yuma County Fair (AZ) in April
The Midway, Provided by Browns Amusements, saw bustling crowds over the course of the 2022 event.

With 2022 half over – and the peak of the fair season kicking into gear – Carnival Warehouse conducted an informal survey of carnival companies as  way to take pulse of the season thus far, and look for augural signs of the second half of 2022.

After a year of lockdowns, the fair industry rebounded with a vigor that exceeded expectations in 2021. While some events, such as the Ohio State Fair, and many California's fairs, were cancelled or drastically downsized, it seemed that most of the fairs saw some softness in attendance, but spending jumped with many carnival companies reporting record-or-near-record revenue years.

But they earned every penny. The comeback year was the most stressful in recent memory, with everyone working harder than ever to cover constant workforce gaps. Labor shortages plagued the industry, and doing more with less staff became the status quo and reducing the number of midway rides an industry-wide reality. 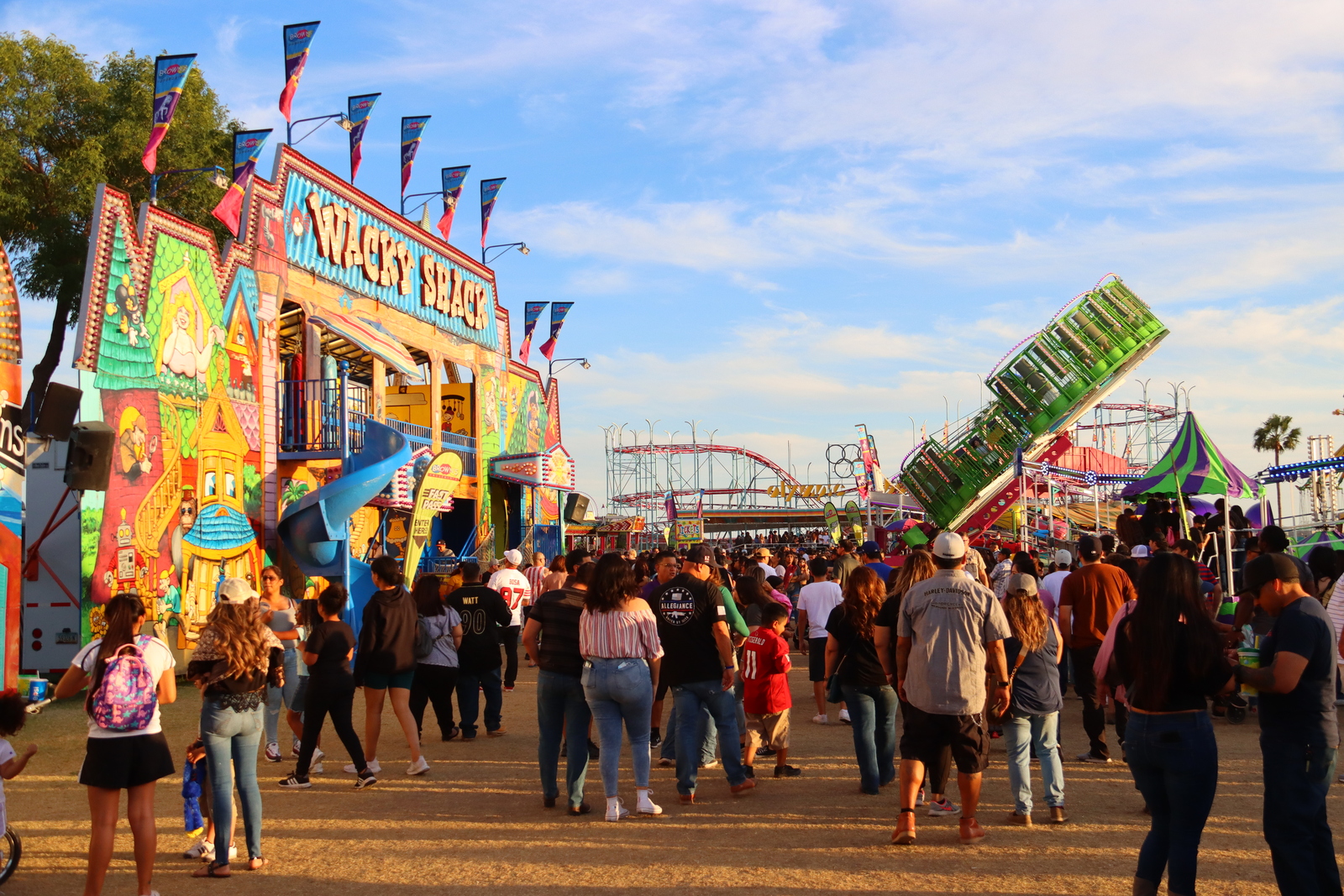 What will this year look like?  The good news is that some H-2B workers are begining to arrive to the companies who were previously capped out. The more troubling news is that everything costs more – including labor – which is both increasing business expenses and decreasing disposable income.

“2021 was an anomaly,” said Bob DeStefano of Dreamland Amusements. “Nobody had anywhere else to go. The food and fuel prices are catching up with everything. Most of our spring dates are free admission, but as we move forward into fair season, I am not sure how well that spending will hold up when we come up to late June or July.”

Winter lingered well into spring in many regions of the U.S., so weather was more often adversary than advocate. Attendance was steady, and while no drastic dips in spending were apparent, a shift in transaction methods portends a change in consumer confidence. “We had some cold and damp weekends, but when we get the weather, people come out,” said DeStefano. “I've seen a very big increase in credit card sales. This implies that people want to come out and visit our product, but the fact they are using credit cards [as opposed to debit cards] tells me the reins are getting tighter.”

Fairgoers seemed far less reluctant to loosen their pursue strings than attendees of still-dates and other outdoor events, but at this point in the year it's difficult to discern how regional specific this trend is and how far reaching it will be. “My Florida fairs, all those regular events, they were all very good, up to par with previous years,” said Rick Reithoffer of Reithoffer Shows. “The spring dates have fallen way off.” 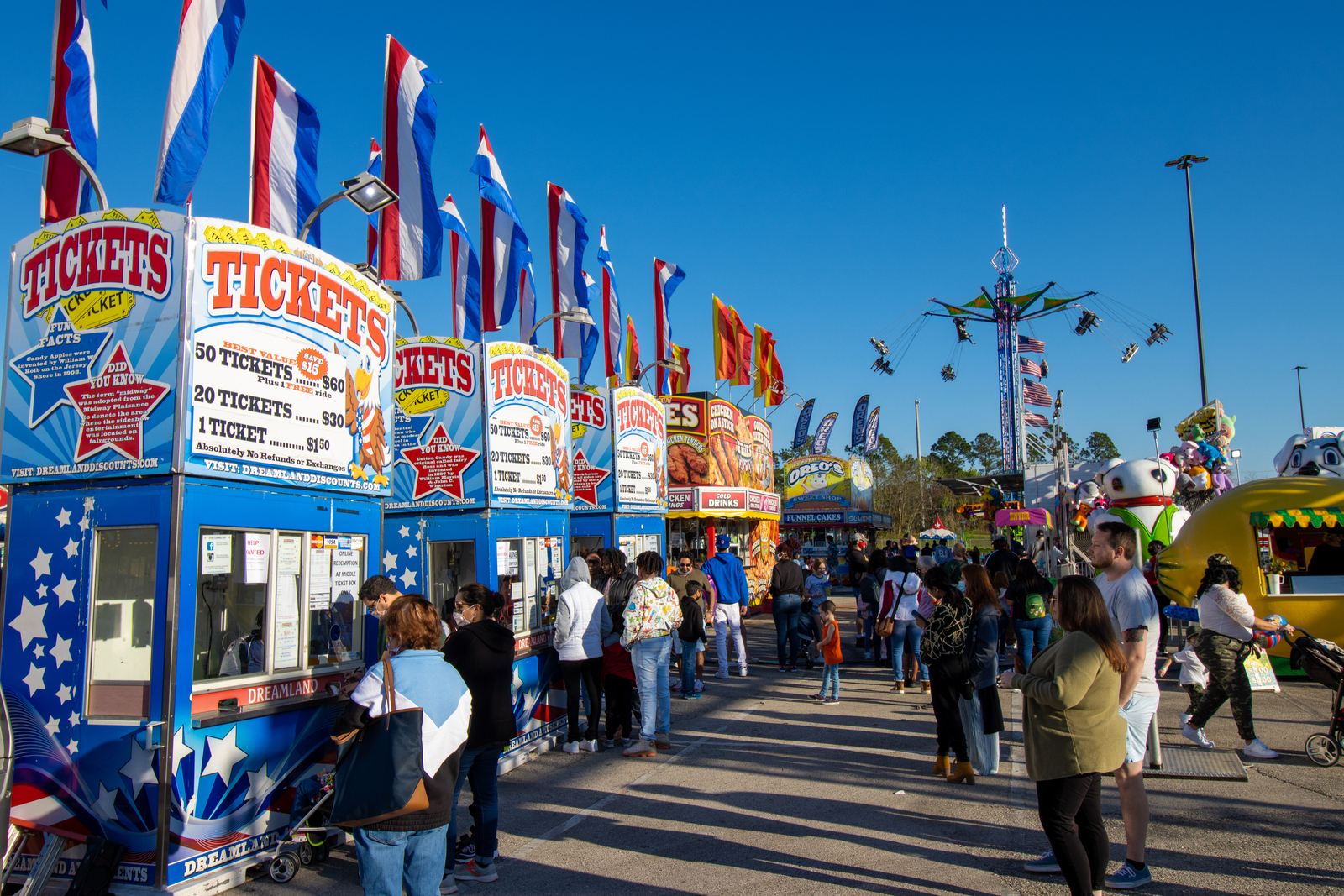 For the rest of the fair industry, the scenarios are now quite different than 2021. Pent-up demand was not only pent-up for the return of the annual fairs, but for anything resembling pre-pandemic normalcy. Fairs were often one of the only games in town, benefiting from both exclusivity and customers flush with stimulus payment. This year, not so much.

Public events of all ilk are back to in business, including the festivals and other outdoor events such as concerts, theaters and family entertainment centers. By almost all accounts, competition for the family entertainment dollar will return to pre-COVID levels, at the same time inflation is eroding the value of that dollar. “The fuel price increases are affecting all of our customers,” said Reithoffer. “There are definitely indications that it is affecting the economy directly, and that people have less expendable income. But the fairs will still do good, but will they stay at the fair as long as they did last year?”

“We were close to where we were this time last year,” said Russ Kissel of Kissel Entertainment. “There has been a drop off in spending. Where we were selling four funnel cakes to a family, we're just selling two, which is what it was like before COVID.”

The fair industry and carnival companies tend to be optimistic folk who are confident of their strong followings for what has been, in most cases, a multigenerational brand-building enterprise. They just have what seems like a reasonable expectation in terms of turnout and spending that some of the 2021 record-or-near-record revenue was due to the comeback bounce.

One 2021 stress-inducing condition that carnival companies seem confident they will be relapsing back into 2022 is under-staffing. While there was some question – as there is every year! – if the H-2B guest visa system would be ready to handle the 2022 season or would the same chaos of last year with worker shortages and systemic processing disruptions be repeated.

The cost of labor is about 30 percent more expensive than last year, including both foreign and American workers, according to carnival companies interviewed. “We got our workers on time and are 100 percent full,” said DeStefano. “We have great workers, but labor costs have increased which affects our bottom line. Fuel prices have doubled, so between running generators to moving the show, it's affecting the bottom line.” 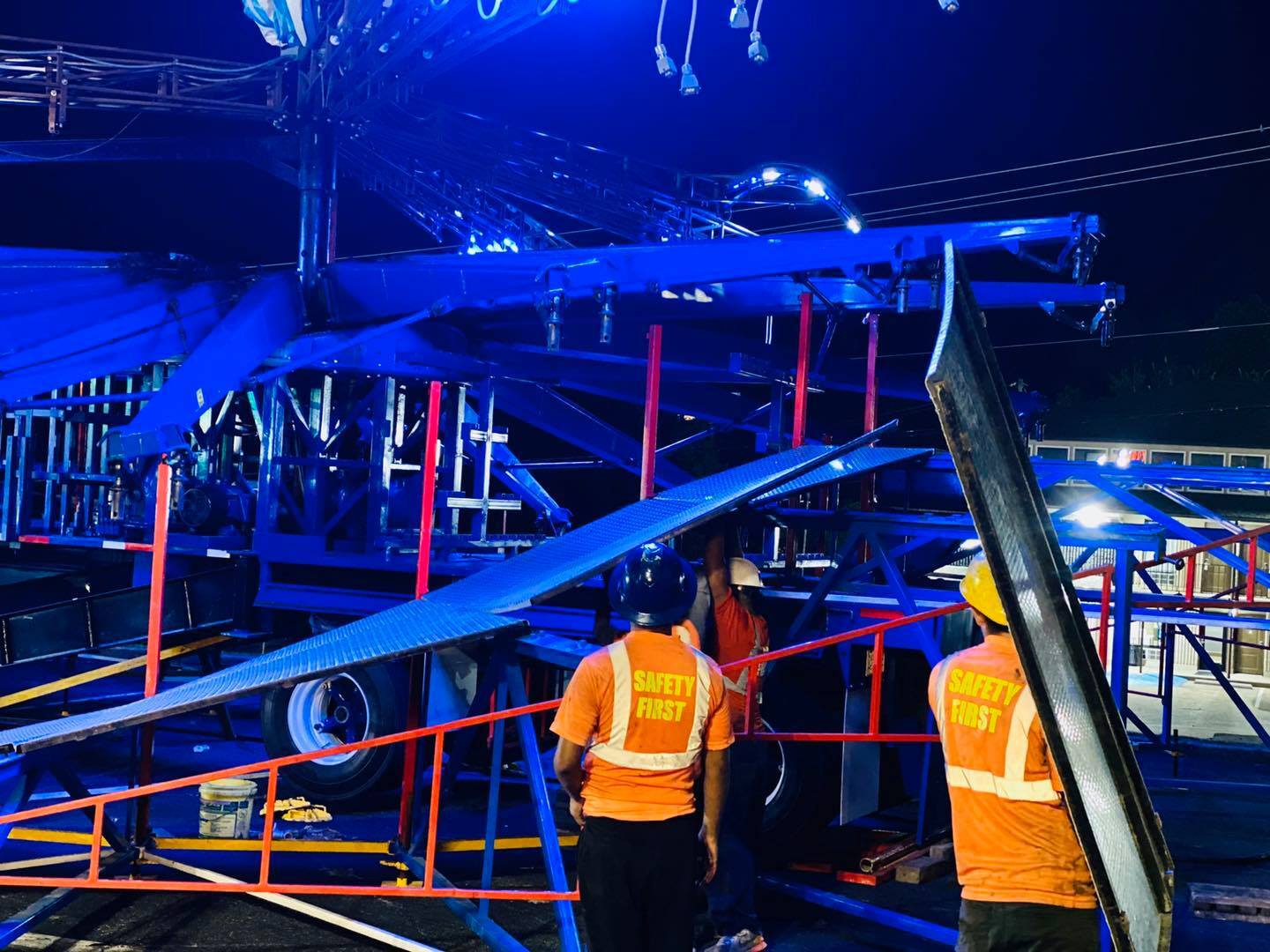 If last year provided a big yes! to the question will people turnout, the 2022 question is how will profitability compare to 2021? The answer to this question has become a critical issue now under discussion between carnival companies and fair boards.

A major factor determining profitability of any midway is the number of rides, their capacity and popularity. The number of total rides and the number per-category are often specified in contracts. In 2021, the labor shortage, coupled with the need for a more spread out layout to accommodate social distancing, saw many fairs waiving contractual obligations for a specific ride minimum. In addition, under-staffed carnival companies optimized worker time by experimenting with limited hours, having the midway open mainly during the peak hours of the fair.

No one can argue with record revenue, but making as much if not more with fewer rides and limited hours was also key for the enhanced profitability of 2021. It's too early to make an industry-wide projection, but it seems most carnival companies have initiated discussions with their fair partners about the optimum midway size, content and hours with a heretofore unseen gravitas.

“What people figured out in 2021 is that it was difficult to get workers, so they put up less equipment or didn't start riding people at noon on a Tuesday, but they had record revenue,” said Michael Wood, Wood Entertainment Company. “What they found out is that they could do more with less.”

“How much is enough for a fair is not a clear cut answer,” said Reithoffer. “With too many hours, the unique stuff you have is unproductive. But how to limit and condense the midway is different for each fair.”

Midway ride shrinkage could run as high as 15 percent fewer rides, depending on the fair. Inevitably, discussions can become strained when a ride that's not as profitable as higher-capacity equipment but happens to be a favorite of the grandchildren of a fair board member, but a greater willingness towards collaboration seems evident. “Fairs are very amendable, they understand the problem,” said Wood. “We are having granular discussions on a piece-by-piece basis of what is best for the midway. It's actually very positive.”

Other midway equipment news is not as positive. The manufacture and shipping of new rides has become more rumor than operating infrastructure – backorders are the rule, not the exception, and delays are not disappearing, but mounting. “I was expecting pieces by February, then they said by Memorial Day and that was last week,” said Reithoffer. “They've stopped telling me when I can expect them.” 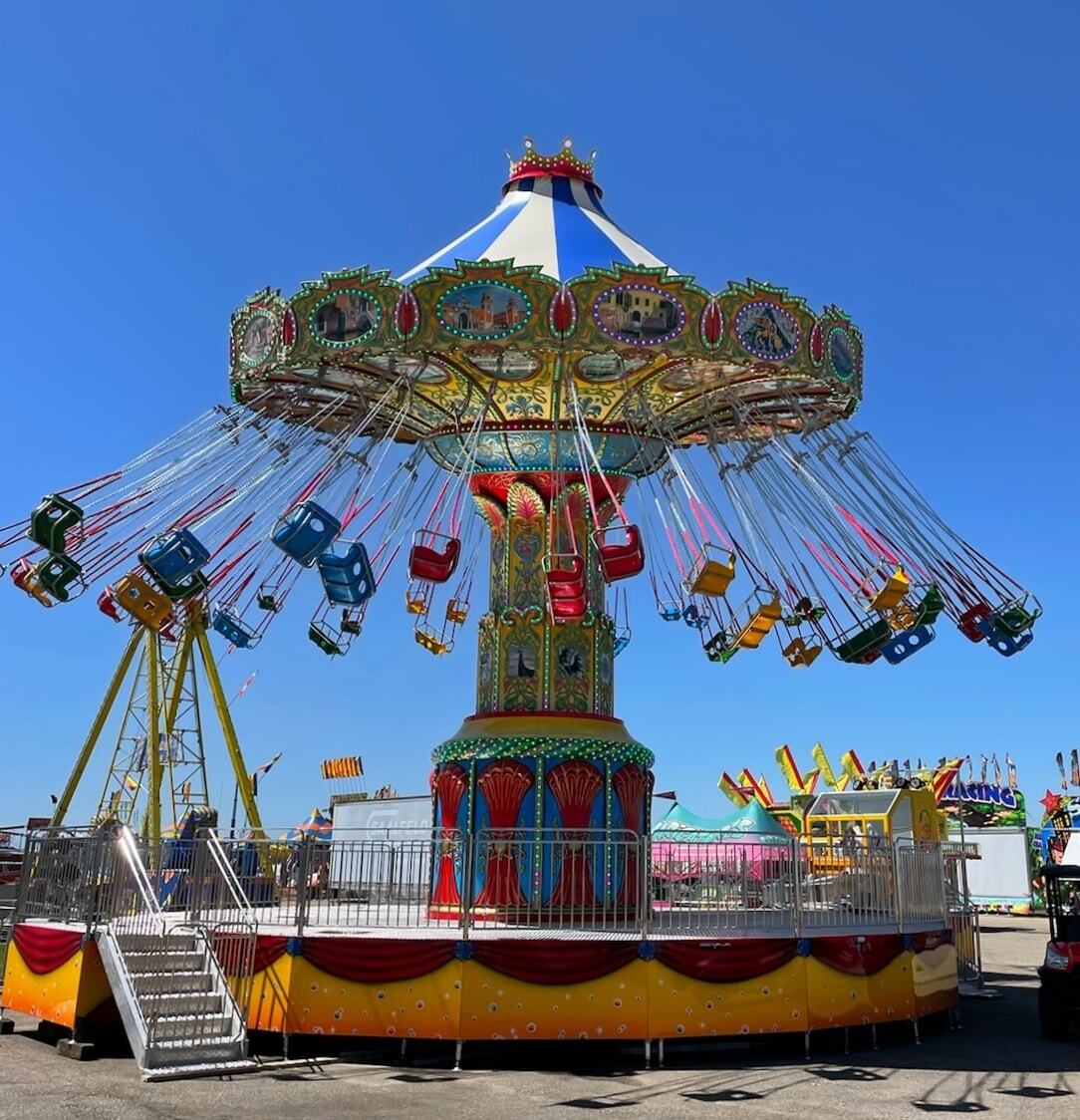 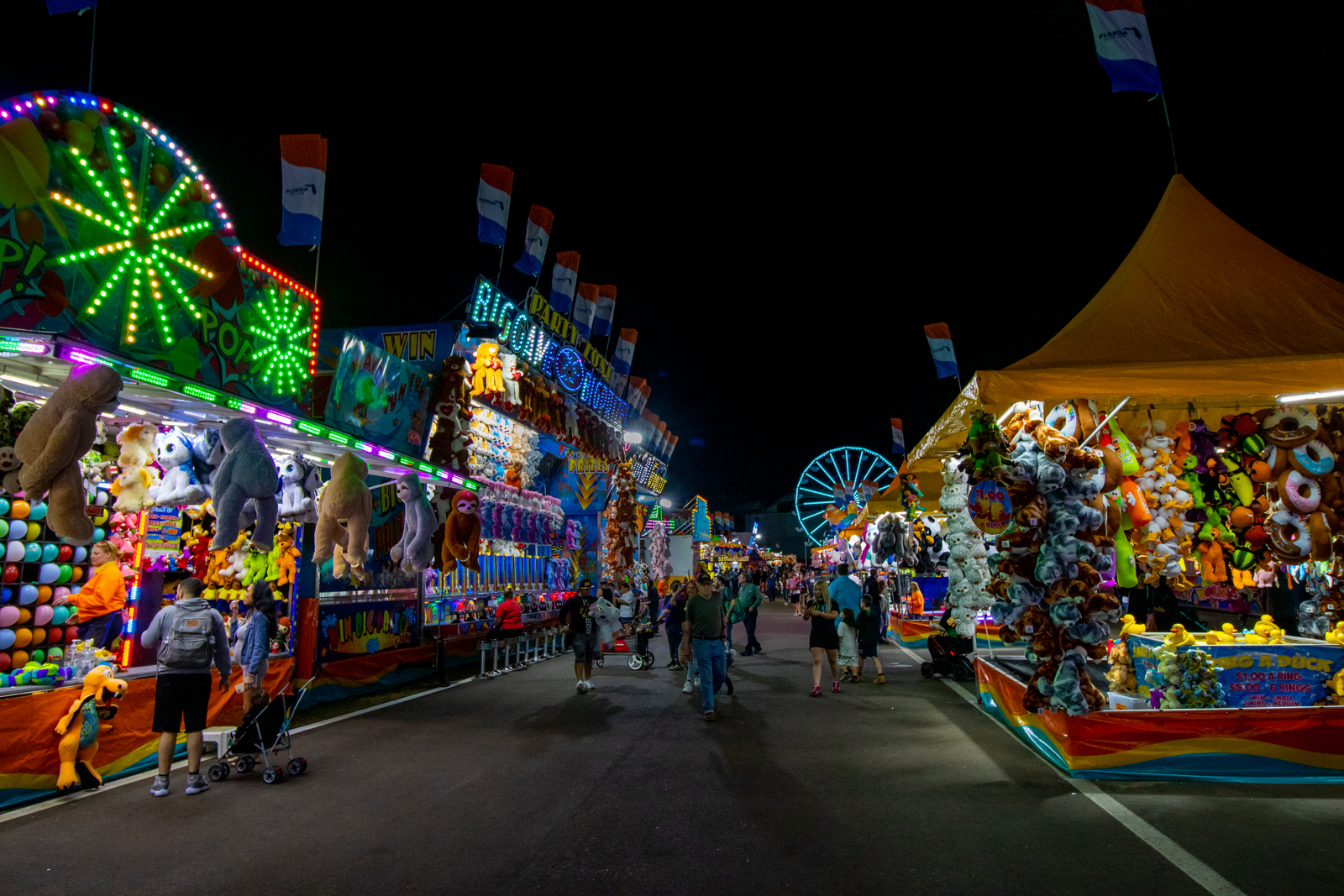 Crowds Flocked to the Yuma County Fair (AZ) in April

The Midway, Provided by Browns Amusements, saw bustling crowds over the course of the 2022 event.