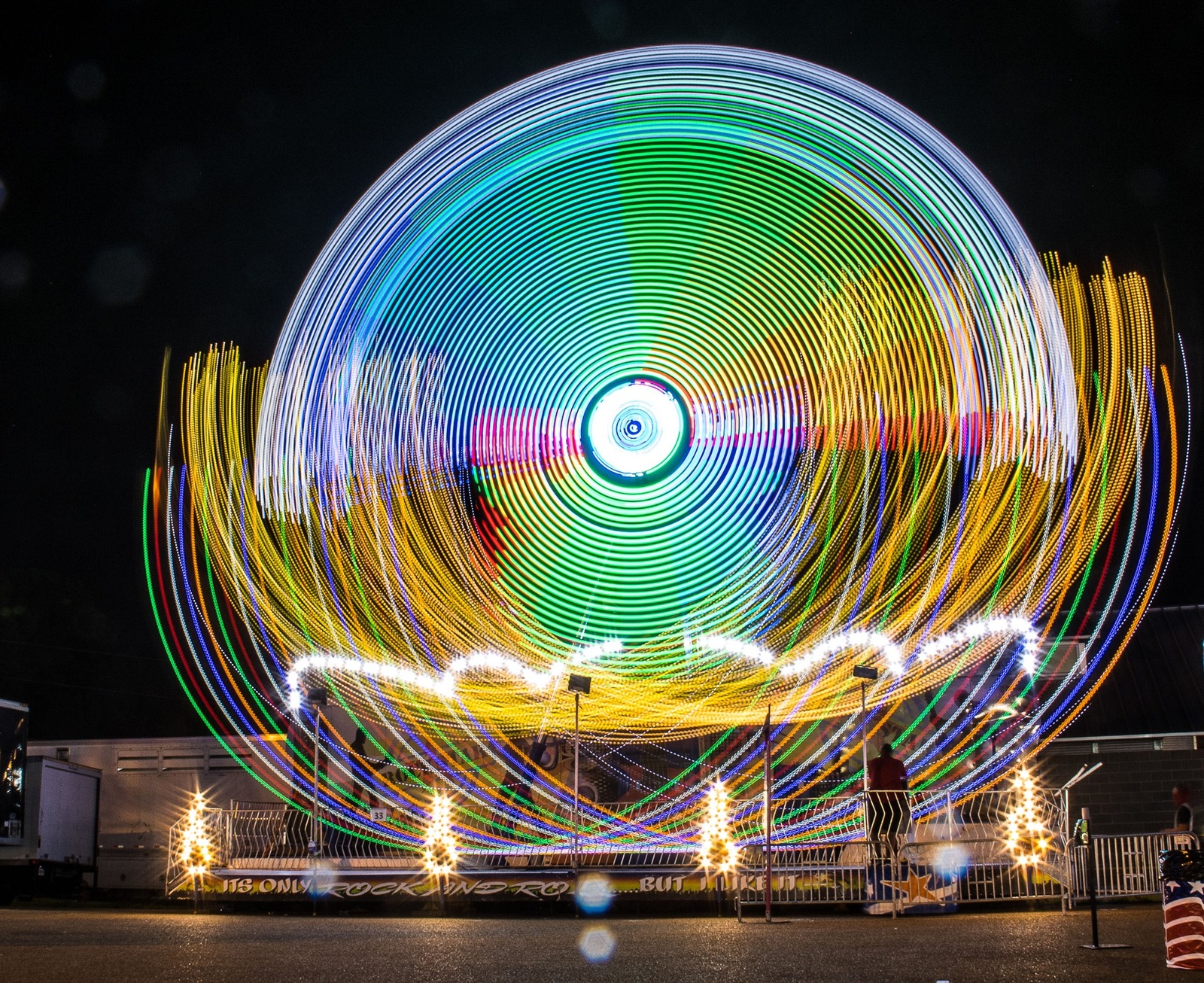 The Mississippi State Fair was one of a handful of fairs that didn't hold a drive-thru and/or virtual fair. Instead, the show went on and one that included an actual midway, one of the rarest attractions in 2020 America. While other state fairs are using 2019 fair as the comparison, Mississippi is also evaluating the controversial decision to hold a fair during the height of the pandemic.

The most quantifiable gauge is attendance – the fair attracted approximately 600,000 attendees in 2019, according to Michael Lasseter Director of the Mississippi State Fairgrounds. This year's attendance was comparable to 2019's fair – but 2020 achieved “about” half that attendance. In retrospect, was holding a fair during the height of the pandemic worth it?

Yes, said Lasseter, who points out that attendance numbers do not tell the complete story. The 2020 edition of the Mississippi State Fair was an invaluable educational experience on how to produce and manage a safe and effective outdoor event, with the procedures and protocols created being carried over to other events, including the 2021 fair and beyond.

“We learned a lot from that fair,” said Lasseter. “We learned how to safely handle crowds, to have the hand sanitizers and sanitation practices like cleaning rotations and cleaning rotations. Last year, there was no roadmap, but because we had a safe fair, we already did all our thinking outside the box. This year, we could concentrate more on new things, and our attractions.” 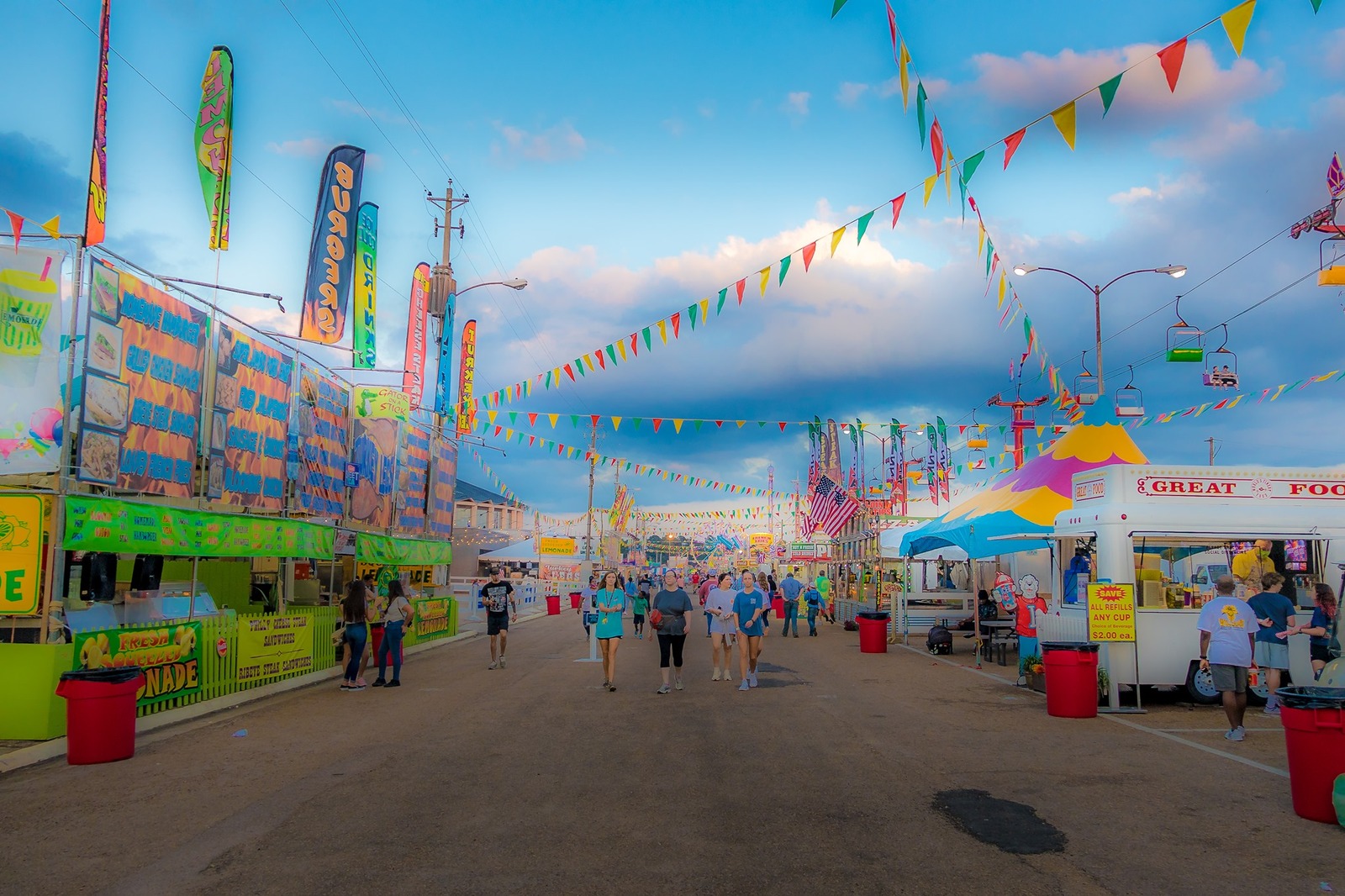 One major difference between the two events was that in 2021, capacity and other restrictions were lifted, while other protocols, such as hand sanitizers and cleaning rotations remained in place. “We continued some practices, and I think we will continue them. They make good sense and I think some things we learned during COVID will last.”

In terms of programming, the fair made a concerted effort to reemphasize Mississippi heritage and agriculture, and created attractions that fulfilled the objects.

Working with the Department of Agriculture, the fair developed The AG Expo – An Educational Showcase of Mississippi Agricultural, a walk-through tour of the state's thriving farming community. Agriculture remains one of the state's leading industries and the exhibition “drew thousands of people,” said Lasseter. “We expanded on what we had previously done. We wanted to bring agriculture to life for people, and show the roots of agriculture in our state.”

Another exhibit celebrating Mississippi had a more troublesome premiere. The ‘Mississippi Frontier Village' – located at the west end of the Midway near the Kid Zone – featured train rides, pig races, pony rides, blacksmiths, cane mill and other demonstrations depicting life in a frontier society. This being Mississippi, and the 21st century, where social media rapidly accelerates opinions into controversies, an attraction centered around life in Mississippi during the 1800s raised what local news – covering the Twitter-verse and other social media platforms – described as “concerns”.

One near-viral tweet read: “I don't think Mississippi's 1800s are worth the resurgence.”

The controversy was relatively short-lived and had little to no impact on the fair. The reason it was quickly quelled  was that the the fair deliberately excluded historical or offensive aspects from the exhibition. Once fairgoers actually visited the new exhibit, there was nothing offensive to be found, only nostalgic family fun.
“We didn't foresee the backlash,” said Lasseter. “This was an old timey Western type exhibit. Some people misconstrued it as about the history of the south. There were no confederate flags or statues or anything like that. We had pony rides and a snake show, it was completely harmless. It was a family exhibit and we wanted everyone to feel welcomed.”

Lasseter pointed out that Alcorn University – an HBC (Historical Black College) whose alumni includes slain civil rights leader Medgar Evers – sponsored a Cane Syrup making demonstration in the village – “we were hurt and shocked that people first reacted the way they did.”

Andy Gipson, Mississippi Commissioner of Agriculture and Commerce, was quoted: “”It's a good example of what happens when social media doesn't have all the facts, and people assume things that are wrong. Those who want to come to the fair, don't let that be discouragement for not coming. I would invite anybody who thinks it's a problem to come walk it with me.”

The social media outcry erupted pre-fair, and as the fair progressed and people visited the exhibit, it was soon apparent to all the Frontier Village was a family friendly exhibit akin to a  Six Flags Wild West Show Lasseter and his team originally envisioned.

What seemed to finally end the criticism was when Hezekiah Watkins, a Jackson, Mississippi resident as well as civil rights activist and former Freedom Rider, visited the exhibit and gave it his seal of approval. ”The theme was going to be in the 1800s, that became very offensive to me,” Watkins was quoted as saying. “In the 1800s we were still being brought over here on slave ships.”

The story read: “While looking at the display, to his surprise, nothing about it was offensive which he said is a relief. “After being here today, I don't see anything that represents what I saw on TV,” Watkins said. 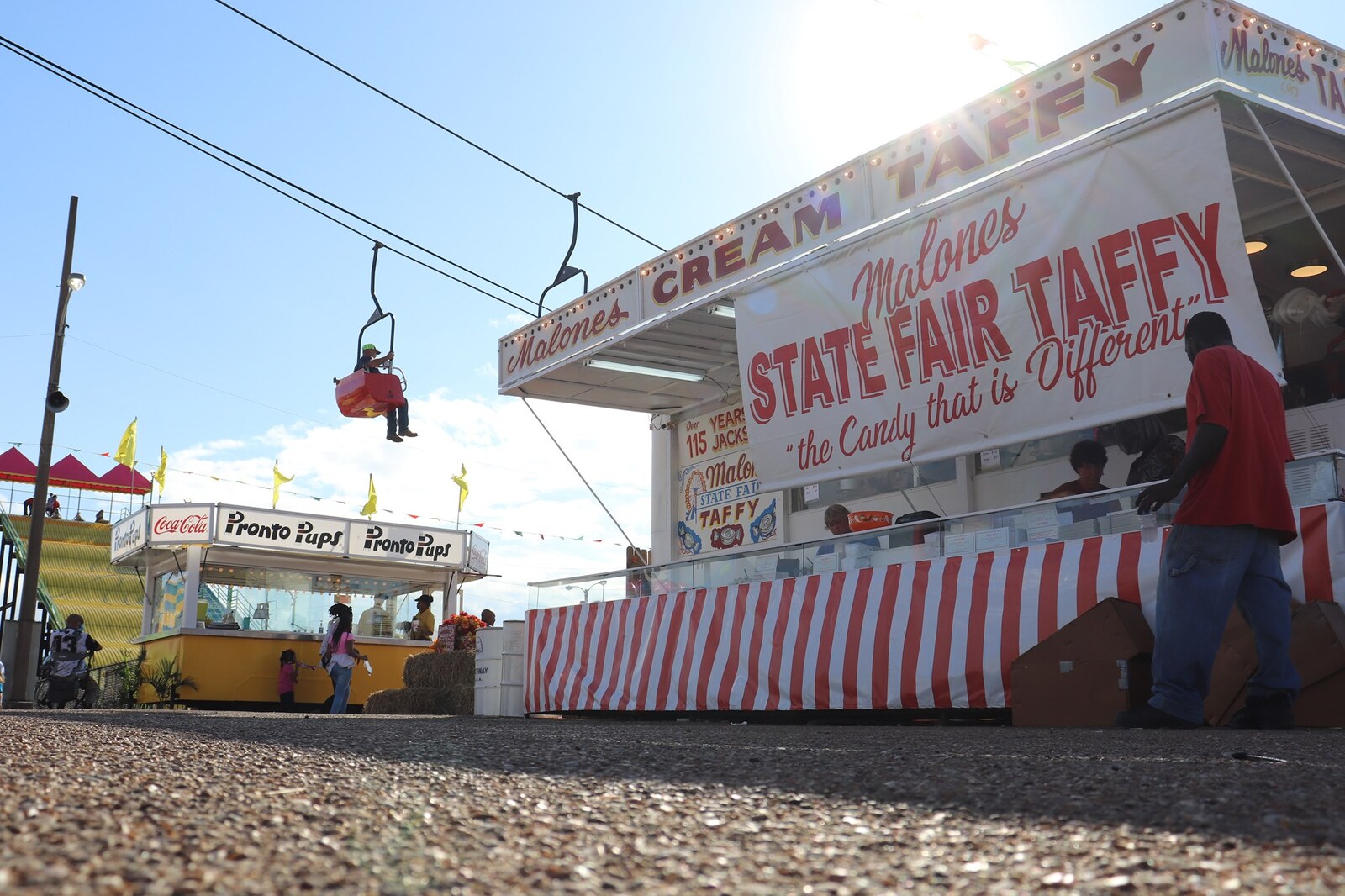 Far less controversial and more concerned with the celebratory aspects Mississippi culture is known for was a Southern Drinks Pavilion, which Lasseter described as a “reinvented connector area of the fairgrounds. We widened some pathways and created an area with a free stage. We partnered with a vendor. Here people could have a drink and watch the show without leaving the area.”

Previously, the free stage and beer vendors were in separate areas and alcohol consumption was contained to a more limited area. “It really worked out well and improved our service to our customer.”

Two other new attractions were the Tri-State Rodeo and the X-Treme Bull Riding Fall National. “We felt these attractions, which had a nominal admission charge, were in keeping with the fair's agricultural roots and were very popular,” he said.

The NAME (National American Midway Entertainment) midway featured about 58 rides – typical for the fair. "North American Midway Entertainment had a wonderful time entertaining at the 2021 Mississippi State Fair,” said Lynda Franc, Corporate Marketing Director, NAME. “While Mississippi was one of the events that we did have the pleasure of running in 2020 as well, 2021 still brought an incredible amount of fairgoers who were just as excited to be enjoying the midway as any other event that we've been to this year.” 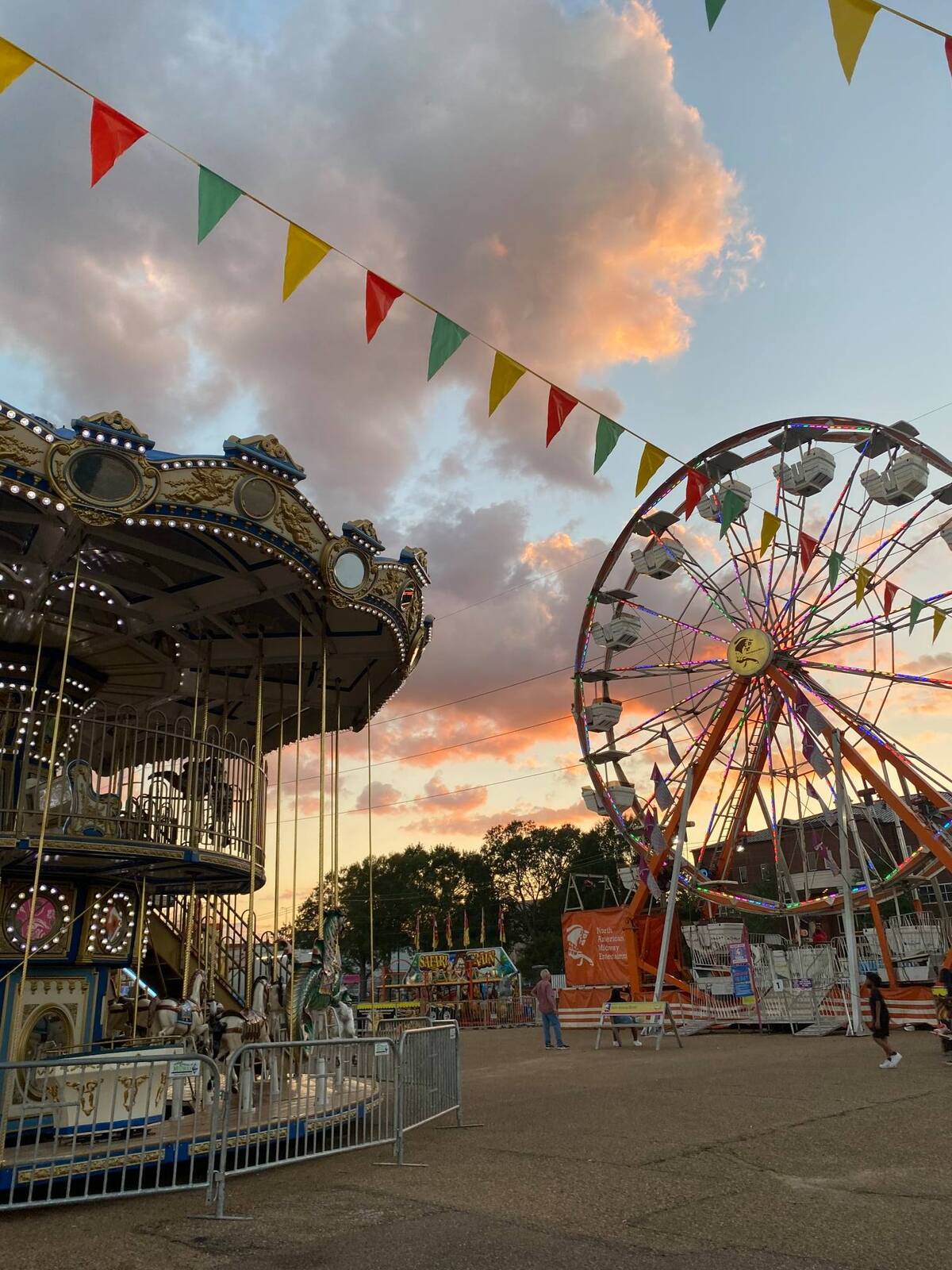 Workforce shortages have plagued all midway providers in 2021, but in Mississippi employing local laborers proved more successful than other stops on the company's 2021 route. “In terms of obstacles, NAME, like so many other businesses, did find that hiring was more difficult this year,” Franc added. “But we're proud to say that we created plenty of job opportunities for the local citizens and had the privilege of employing some of the hardest workers in the industry."

The fair featured 80 food vendors (plus an additional 17 NAME concessionaires). One notable fair cuisine – amid the traditional turkey leg, corn dogs, Chicken-on-a-stick, funnel cakes and other staples – was Blue Elephant Thai Food. “They always had a line, it was really popular,” said Lasseter.

The food supply disruptions that are now making headline news was also felt at the fair. “We heard grumblings about vendors running out of corn dogs and hot dogs the last few days of the fair,” he said. “But we did give away more than 100,000 free southern biscuits.”

Last year, the Mississippi State Fair reorganized its managerial structure, abolishing the state fair commission, placing the fairgrounds under the Department of Agriculture and reinvesting upwards of $30 million in capital and infrastructure improvements. A year later, the benefits were lauded by fairgoers. “The Agricultural Department is doing a wonderful job. We've been seeing a number of improvements, and people are seeing these things and are excited about the fairgrounds again.”