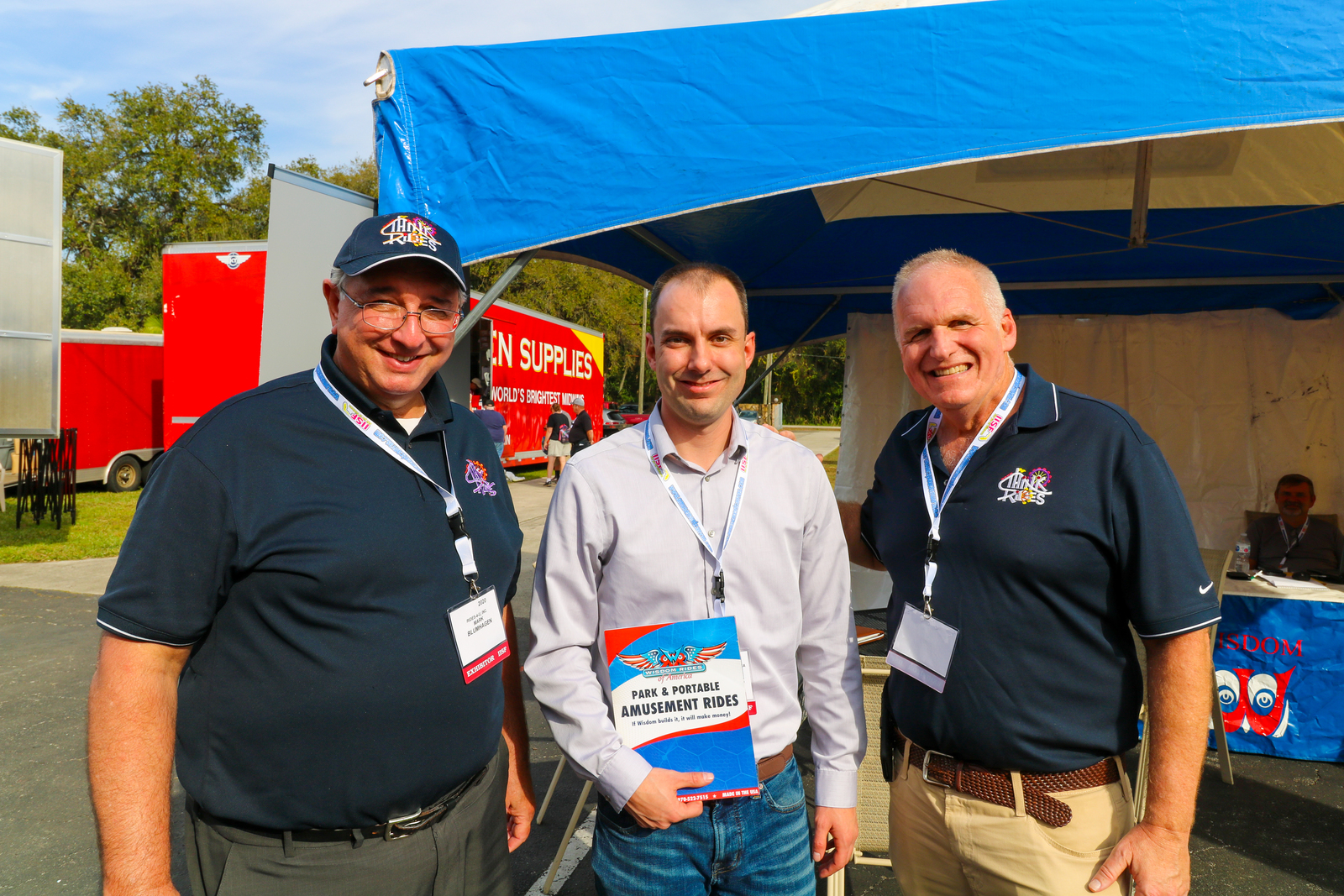 The 2020 IISF Trade Show opened in Gibsonton Florida with picture-perfect weather.  Temperatures rose to 79 degrees and the sun was shining, reflecting the optimism of many attendees.  Crowds trickled in throughout the day and many areas of the show had clusters of people looking at new items, greeting friends and making deals.

The show itself shifted a day in 2020, running Wednesday through Saturday with opening at 10 am and closing at 5pm.  While it remains to be seen what kind of crowds Saturday will bring, so far, with reported record pre-registration, the show is off to a great start.

Exhibitors all seemed to agree that people were in a buying mood with the economy in good shape and people spending.  Robert Briggs of Modern Midways, one of the few carnivals open already in the new year, said people were spending at his Florida events so far.  Trade show exhibitors are hoping the buying mood will translate into record sales for 2020.

The show floor itself has a very nice selection of displays.  Luna Park, located near the front entrance has two wheels on display, one sold to Frazier Shows and the second to Big Round Wheel, LLC.

Uniglide, was just one participant in a thriving trailer inventory on display with manufacturers new and old.  Uniglide has a beautiful new Icee trailer being showcased, which is going to Stevie and Gina Ianni who travel with Strates Shows.  Also on display is a Corn Dog/French Fry trailer which is being delivered to North American Midway Entertainment.

Dalton Kid Rides had a Farm Tractor ride on the grounds, rounding out the ride displays on the entrance side.  Kevin Dalton was busy showcasing the new attraction to several interested carnival owners.

Wisdom Rides of America had a lot of interest and discussion at their booth for two reasons: First, the company did not have a ride on display, for the first time in 50 years, according to Jared Davis, president of Wisdom.  Davis explained that the big project the company had been working on, a new custom Himalaya, themed “Hawaiian Express” is going to Butler Amusements, and Butler has a date on the west coast that would not enable the ride to come to Gibtown and make it back.  Although Davis was disappointed to not have an attraction for the first time, he is excited to be back with a new spectacular ride in 2021.

The second reason for talking about Wisdom is the big ride announcement they made along with Rides 4 U.  Considered to be the first new entry into the major ride market in many years, the new attraction, tentatively called the “Whirlpool” will be built by Wisdom for a projected fall 2020 debut.

The ride was conceived by Rides 4 U's Mark Blumhagen, a veteran of many successful ride designs.  Blumhagen invented the Heart Flip when he was just 15, showing the ride first to King who rejected the plans before selling the idea to Grover Watkins who eventually built the piece.  Blumhagen has designed or had a hand in designing carnival industry staples such as the lay down cars for the Cliffhanger, the Wisdom Monster Truck ride, the Zendar and the Storm Trooper. Blumhagen recently secured a patent for his new Whirlpool and is excited for its prospects.

The new concept, which Blumhagen describes as a cross between a bumper car and a Tilt-A-Whirl, starts with an inert turntable holding 10 vehicles in “scallops”, or bays. As the turntable rotates and raises slightly, the cars release from one scallop as it nears the 2 o'clock position, falling freely from scallop  to scallop.  Where the cars land depends upon the stack of cars in the next scallop, the angle of the drop and the spin of the turntable and cars.

“There are several classic actions in our business that are time tested”, said Blumhagen.  “This ride combines two of those popular actions with a new twist”, he added.

The ride is projected to be a true family ride with exciting action everyone can enjoy.  It is anticipated that the ride will take 2 men 45 minutes to set up with the cars remaining on the platform.  “The only thing they will have to lift is the fencing”, said Blumhagen, noting nothing would weigh more than 50 pounds.

The prototype will be about 36' in diameter and hold 10 cars although the team says that larger sizes for parks or even smaller versions for FECs are definitely possible.  The restraint will be a lap bar-type safety that Wisdom is currently designing.  If the ride were to lose power, the turntable automatically returns to a level position.

The ride will also have a brilliant light show, sign and scenery display, adding to the excitement for the guest.

Blumhagen and Len Soled of Rides 4 U brought the idea to Jared Davis of Wisdom Rides of America who agreed to build the concept.  Davis said he was excited about the new design as it fit with his company's commitment to bringing new and exciting attractions to the industry.  Wisdom will build the ride and help market them with sales and additional marketing handled by Soled's Rides 4 U.

Soled said he is very excited about the new ride concept because he feels the industry has been “a little stagnant” lately and will benefit by a solid new piece that they are hoping to introduce for under $500,000.  Soled promises that the Whirlpool is just the first of several new designs he and Blumhagen have been working on which they are hoping to roll out in the near future.

Click on the video below for an exclusive video simulation of the new ride in action!

Speaking of Rides 4 U, they once again have one of the larger ride displays at the show.  Len Soled said displaying at the show is an important part of marketing for his business and great way to talk with customers about new purchases.  On site in Gibtown was a Sky Flyer, a themed Frog Hopper, a Crazy Cars and a KMG Freak Out, themed No Limit.

Stayed tuned for continued coverage of the 2020 IISF Trade Show. 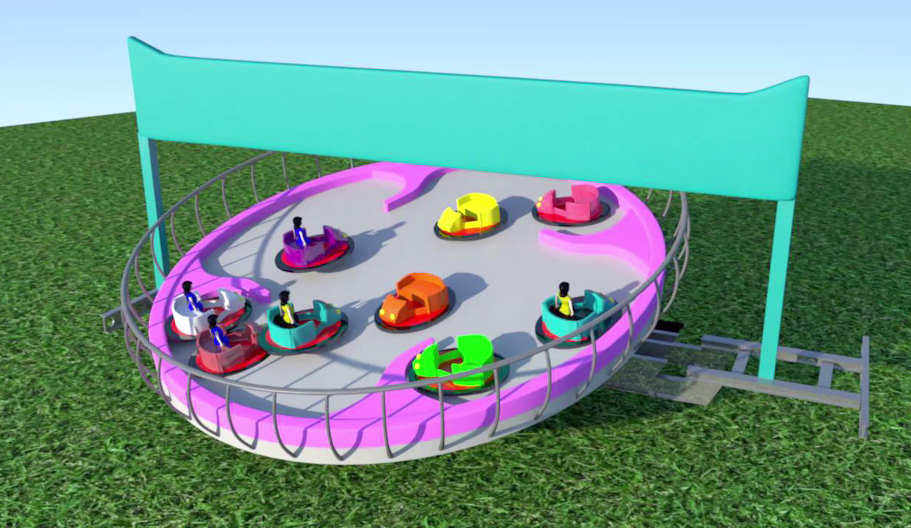 Rides 4U and Wisdom Rides

Mark Blumhagan (Left) of Rides 4U, Jared Davis of Wisdom Rides of America (center) and Len Soled of Rides 4U make a new product announcement at the Gibtown trade show 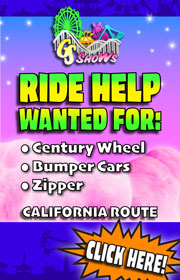